Alexis Rapo is the daughter of Maristela Rapo and is one of the founders of Giving The Glam. Her career in Giving the Glam started in 2014, when Alexis connected Maristela Rapo with the METCO coordinator from Dover-Sherborn High School, knowing that Maristela could use her fashion expertise to help a kid in need, and from there, Giving The Glam was formed.

Alexis has a very tight bond with this program, and she dedicates a lot of her time helping alongside her mother. You can find her helping pick out gowns with the girls, making the final adjustments on fitting days, or find her dancing with the participants on their prom day. Alexis loves helping make a difference in these kids’ lives!

Alexis was never into fashion; she preferred playing soccer for her high school varsity soccer team at Dover-Sherborn high school. Alexis is currently in her sophomore year at Boston University where she is studying pre-law. After undergrad, Alexis plans on going to law school to pursue a law degree. 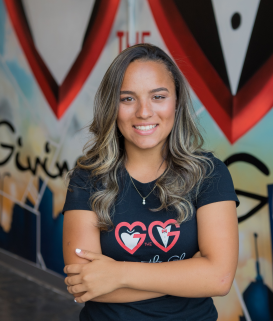 SADD is a group that attempts to deter students from making destructive decisions that could ruin their futures, to do this the group comes up with ingenious tactics to get their messages across. Her career in Giving the Glam started without her really knowing. In 2014, Alexis connected Maristela Rapo and the METCO coordinator from Dover-Sherborn High School, and once they connected, Giving The Glam was formed. Due to her mother, Maristela Rapo, being an immigrant from Brazil, and coming from a similar background as the participants, Alexis has a close connection to this program and dedicates and volunteers her time alongside her mother helping, whether it be on picking gowns with the girls or fitting days, or the grand finale, prom day. Alexis loves helping make a difference in these kids lives!